From a pastel Portrait of a Lady by French Impressionist artist Jean-Baptiste Armand Guillaumin that attracted bids to $9,375 at Showplace, to a carved and painted ship’s figurehead that sailed to $15,900 at Merrill’s, the female figure is well represented in noteworthy auction results our February 11 issue. Not to be outdone, an elegant blond in a Lichtenstein watercolor raced to the lead of a Bill Hood auction, at $57,600 while a courtly jade figure was certainly one of the desirable pieces in a lot of Chinese jade that topped Cottone Auctions, at $93,000. These and more await the avid auction follower. 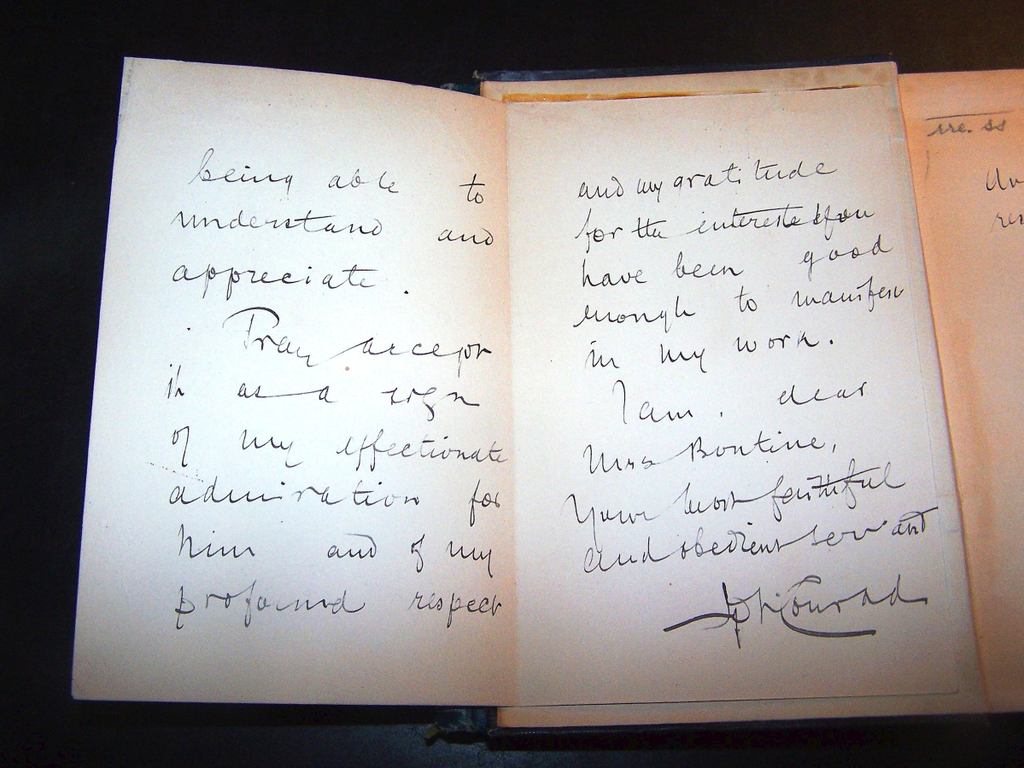 GLASTONBURY, CONN. – Despite being an ex-library volume, a first edition Typhoon and Other Stories by Joseph Conrad brought $1,610 at Connecticut River Book Auction on January 21. Why? “Because, explained Tom Gullotta, the firm’s owner, “laid into the book was a letter from Conrad to Mrs Bontine, the mother of the person to whom Conrad dedicated the book expressing his admiration for her son. Graham, the son, was the first Socialist member of the British Parliament and led a life similar to that of the film character “Indiana Jones.” For information, www.ctriverbookauction.com or 860-908-8067. 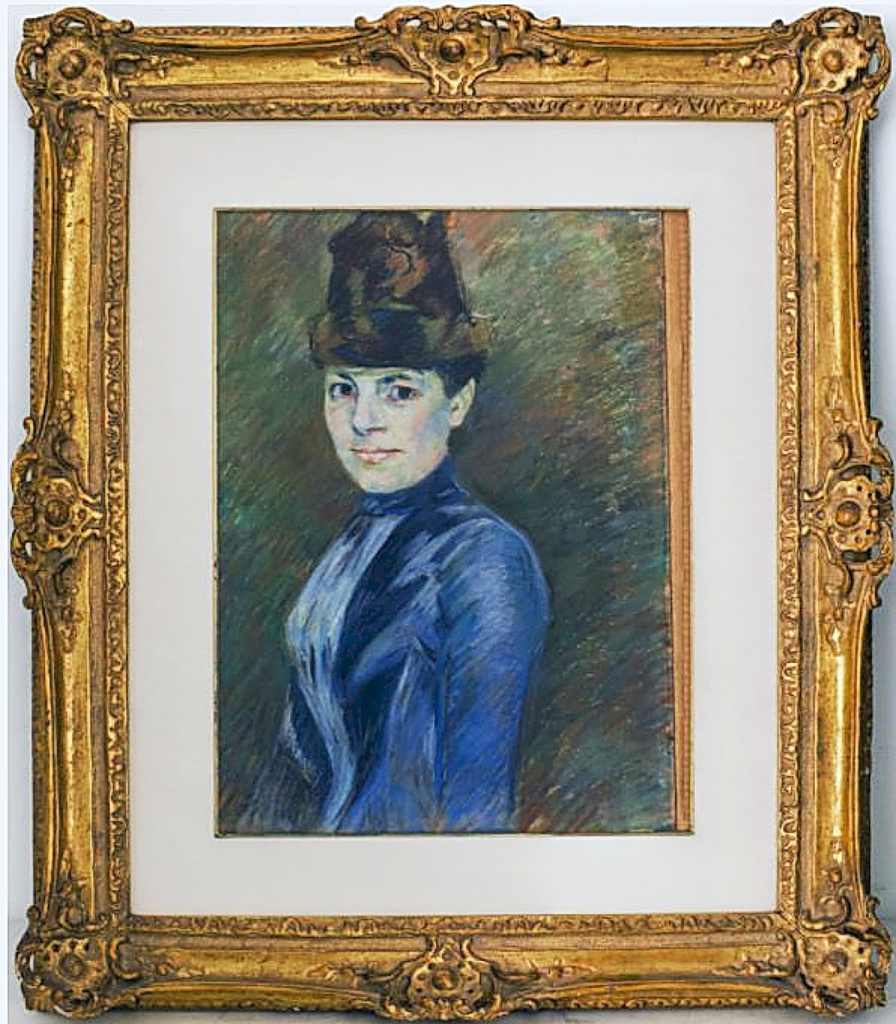 NEW YORK CITY – Auctions at Showplace continued its winter 2022 auction season with a grouping of 280 lots from New York City metropolitan area estates on January 23. The sale included fine art, jewelry and silver from New York City estates. Highlights were led by an 1890 pastel on paper portrait of a woman by French Impressionist artist Jean-Baptiste Armand Guillaumin (French, 1841-1927). Finishing at $9,375, “Portrait de Femme,” 1890, was done on pastel on paper mounted on board and was signed upper right. Measuring 24 by 18 inches, it had been purchased from Alexander Kahan Fine Arts and was previously at Hirschl & Adler. It was removed from a Park Avenue estate. For information, www.auctions.nyshowplace.com or 212-633-6063. 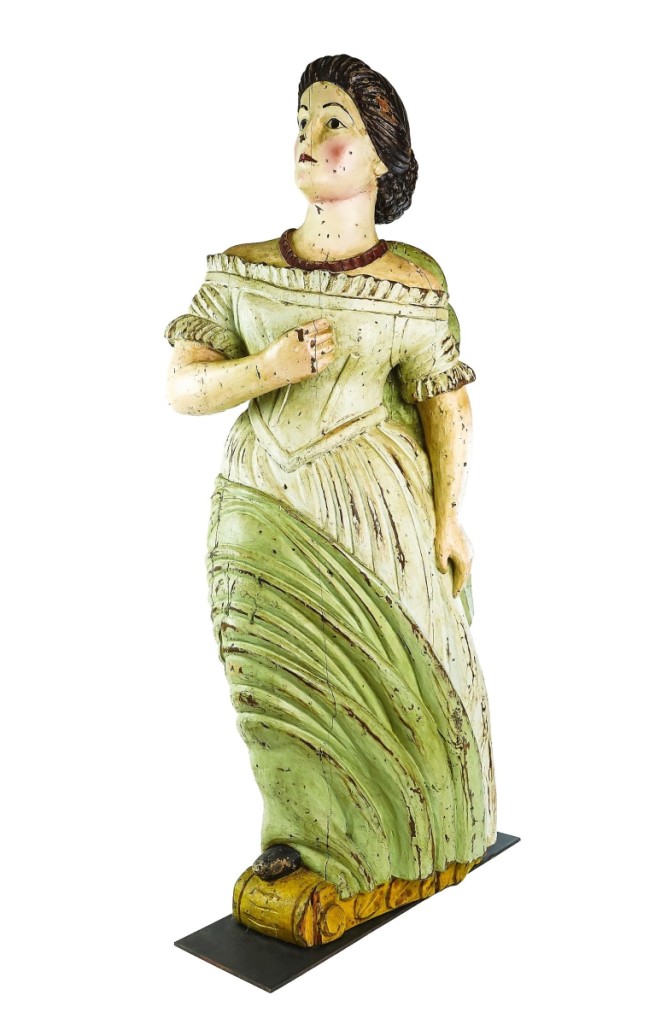 WILLISTON, VT. – A Nineteenth Century carved wooden ship’s figurehead of a woman with polychrome paint, 40 inches long, was a bidder’s favorite at Merrill’s fine arts and Americana auction on January 21. Selling for nearly double the high estimate at $15,990, the figurehead was just one of the 692 lots that crossed the block, including clocks, theorems, New England landscapes. Early maps and a group of furniture descending in the family of Charles Hallowell Stephens and Alice Barker Stephens of Philadelphia. For information, 802-878-2625 or www.merrillsauction.com. 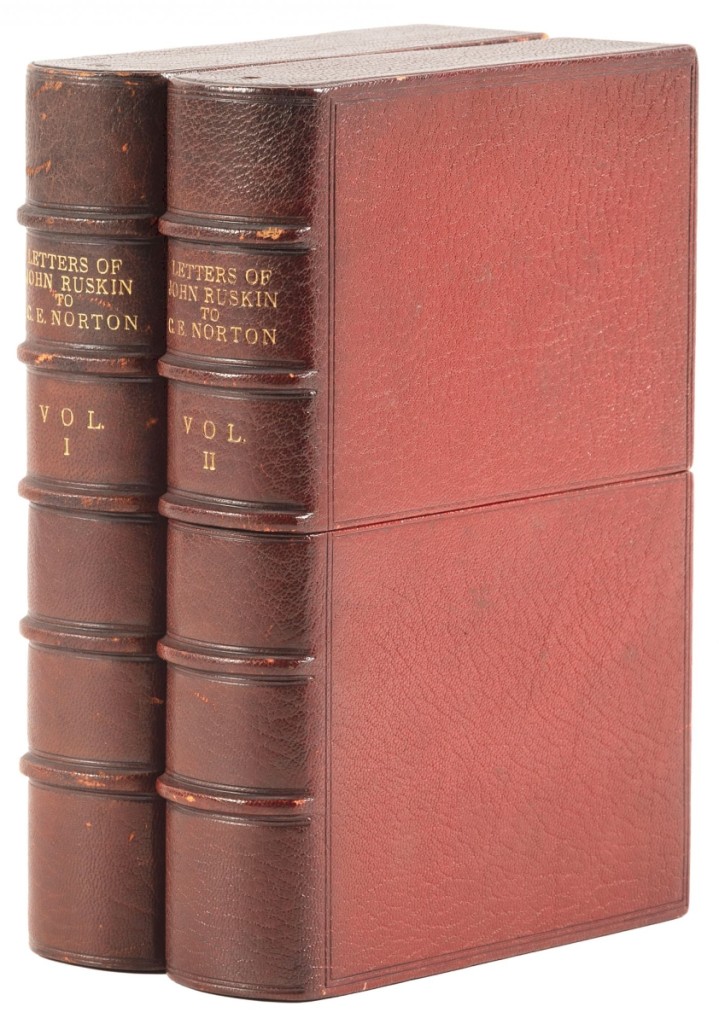 BERKELEY, CALIF. – PBA Galleries’ first auction of the year, conducted on January 13, had an impressive 91 percent sale rate, with a large amount of early bidding on numerous lots and competitive bidding throughout the sale. Bidding was spirited for the unique copy of Letters of John Ruskin to Charles Eliot Norton exquisitely bound by the Doves Bindery in full black morocco, tooled in gilt, spines with raised bands, gilt-decorated compartments, numbered and lettered in gilt; gilt dentelles, all edges gilt. The two volumes housed in custom a two-part red morocco slipcases with spines lettered in gilt by Riviere & Son sold for $8,125. For information, 415-989-2665 or www.pbagalleries.com. 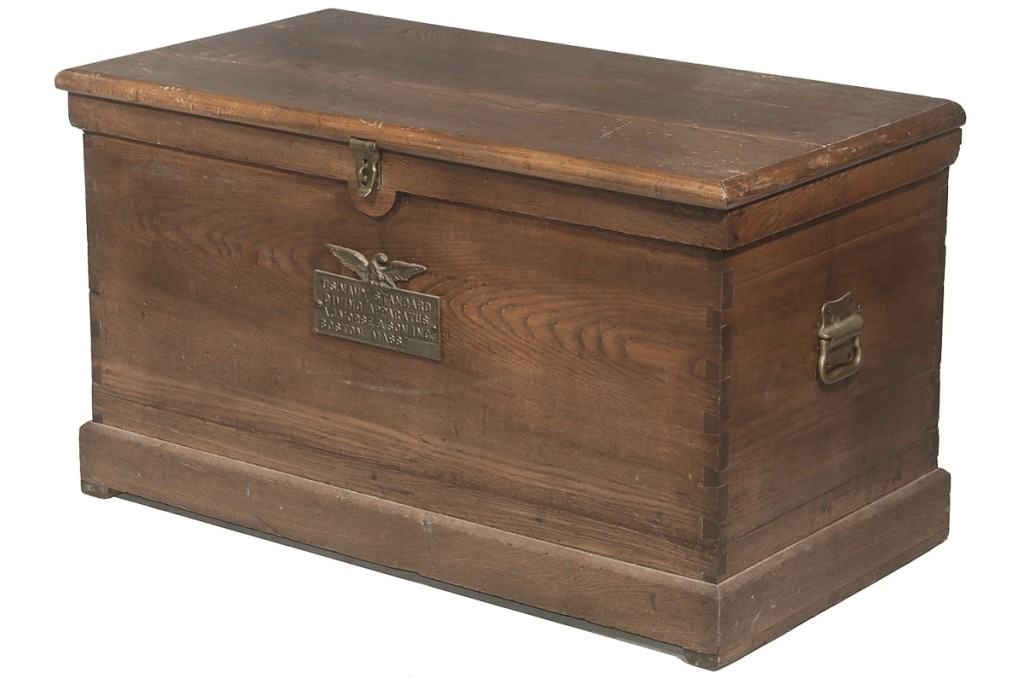 DANIA BEACH, FLA. – A watercolor on paper by artist Retna (b 1979) depicting an array of abstract and directional symbols executed in multicolored hues took top honors in Akiba Antiques’ “The Eclectic Eye” sale on January 25, selling for $22,500. Signed along the bottom and numbered “56304” and stamped with embossment, the 60-by-40-inch work was given by the artist to his personal assistant during Art Basel Miami. His full name Marquis Lewis, Retna is a contemporary artist, primarily recognized for graffiti art. He was born and raised in Los Angeles and started his career in the early 1990s. For more information, 305-632-5563 or www.akibaantiques.com. 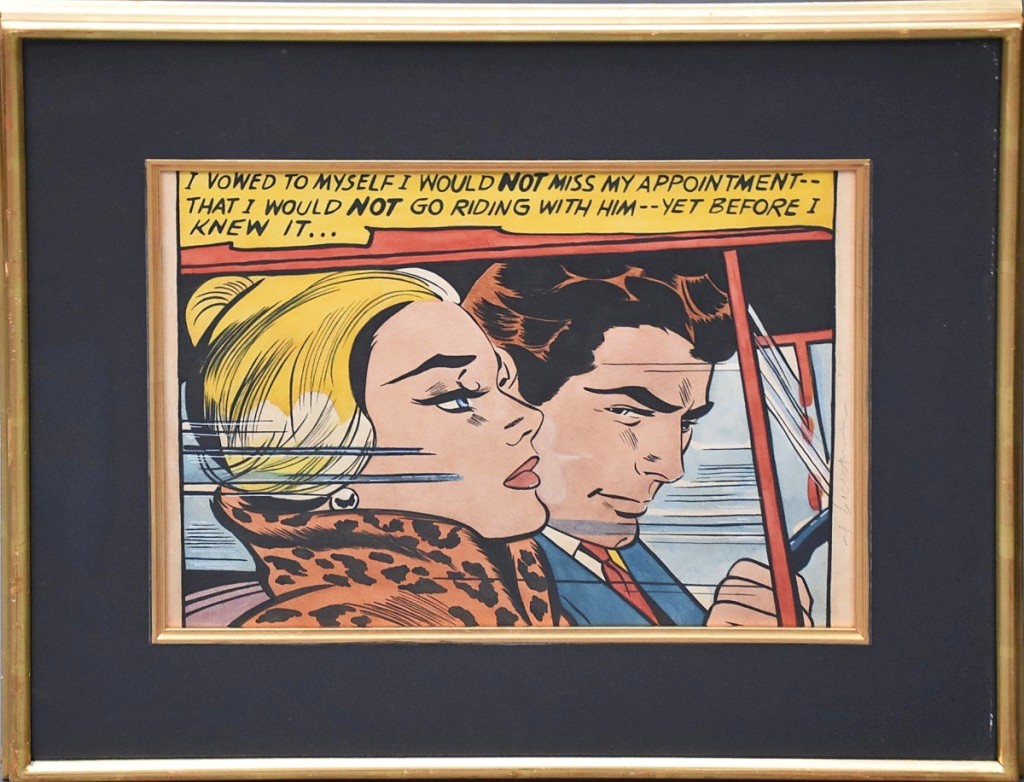 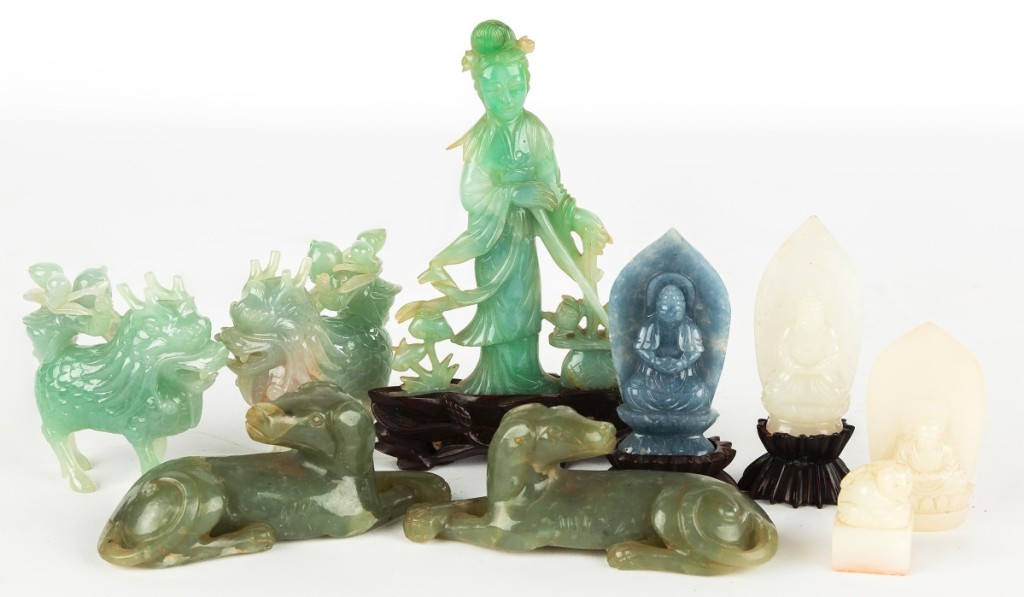 GENESEO, N.Y. – The top lot in Cottone Auctions’ January 26 375-lot Art & Antiques auction was a group of Chinese carved jade articles that shattered their $700-$1,000 estimate to bring $93,000. The group of articles, which did not exceed 5 inches in height, included two recumbent dogs, two dragons, a standing figure on a wooden base and four other pieces, came from a Rochester, N.Y., collection. For information, www.cottoneauctions.com or 585-243-1000. 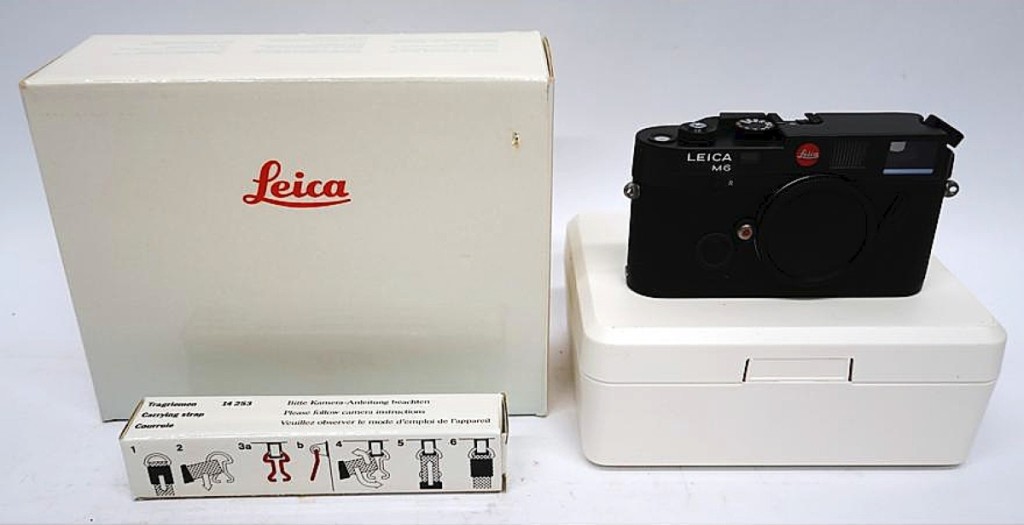 TIMONIUM, MD. – A Leica M6 camera, new in its box and rated in near-mint/mint condition, achieved top-lot honors at Richard Opfer Auctioneering. Offered in the 406-lot Timed Online Eclectic Collection Auction, which closed on January 27, it realized $2,478 against an estimate of $50-$100. For information, 410-252-5035 or www.opferauction.com.