The top lots this past week brought high-quality objects from every category across the block, from fine art to apparel to ship models. A Charles Loloma cuff bracelet with an almost impossibly perfect curve tripled its high estimate to achieve the highest price in this week’s highlights. Hollywood was well represented with a fresh-to-market gown worn by Doris Day on screen and a porcelain statuette from an auction focused solely on Disneyana figurines. Ships and sails came in with a Tod Lindenmuth painting, accompanied by a Ramage & Ferguson half hull model. Read on for more winning bids. 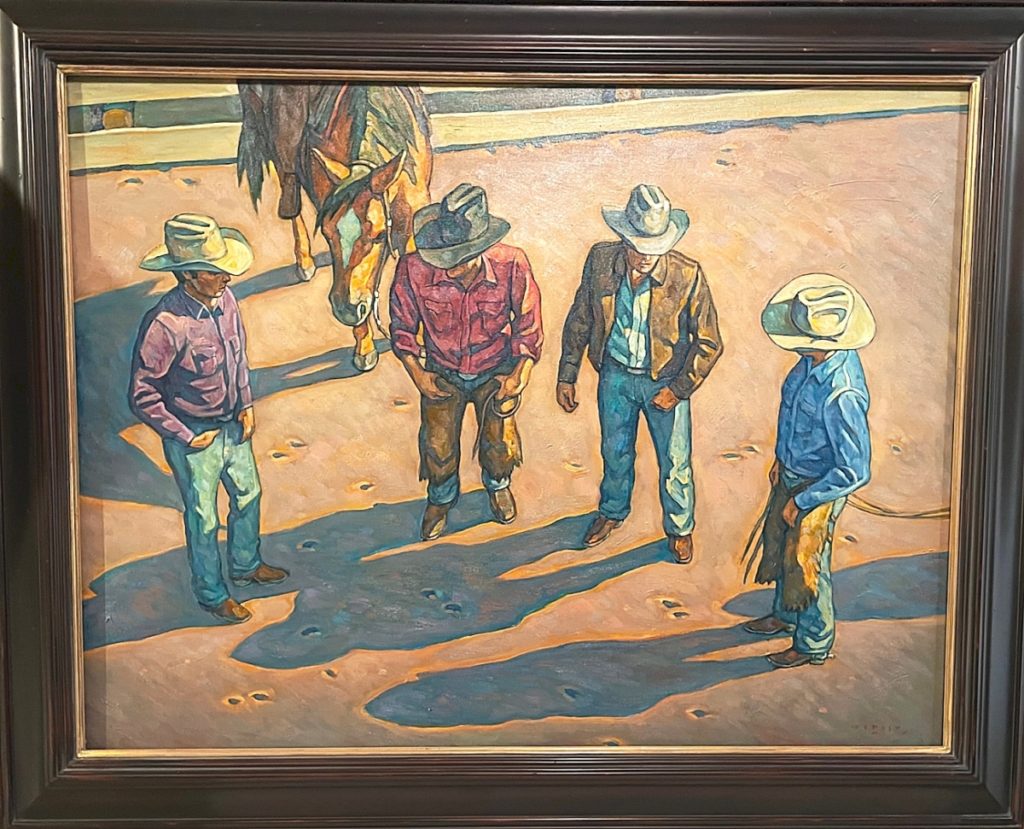 MEDWAY, MASS. — On June 28, Coyle’s Auction conducted a multi-estate sale from Boston-area homes. Their top sale was an unexpected subject so far north, an oil on canvas painting by Howard Post (b 1948) titled “Cowboy Conference,” 2011. From Tucson, Ariz., Post was a Professional Rodeo Cowboys Association competitor in the 1970s as well as a commercial artist. He later transitioned to fine art inspired by the way of life he knew best, rendering scenes from the ranch in strong shapes and shadows, often using up to only six main colors. The painting sold for $7,360. For more information, 508-733-6868 or www.coylesauction.com. 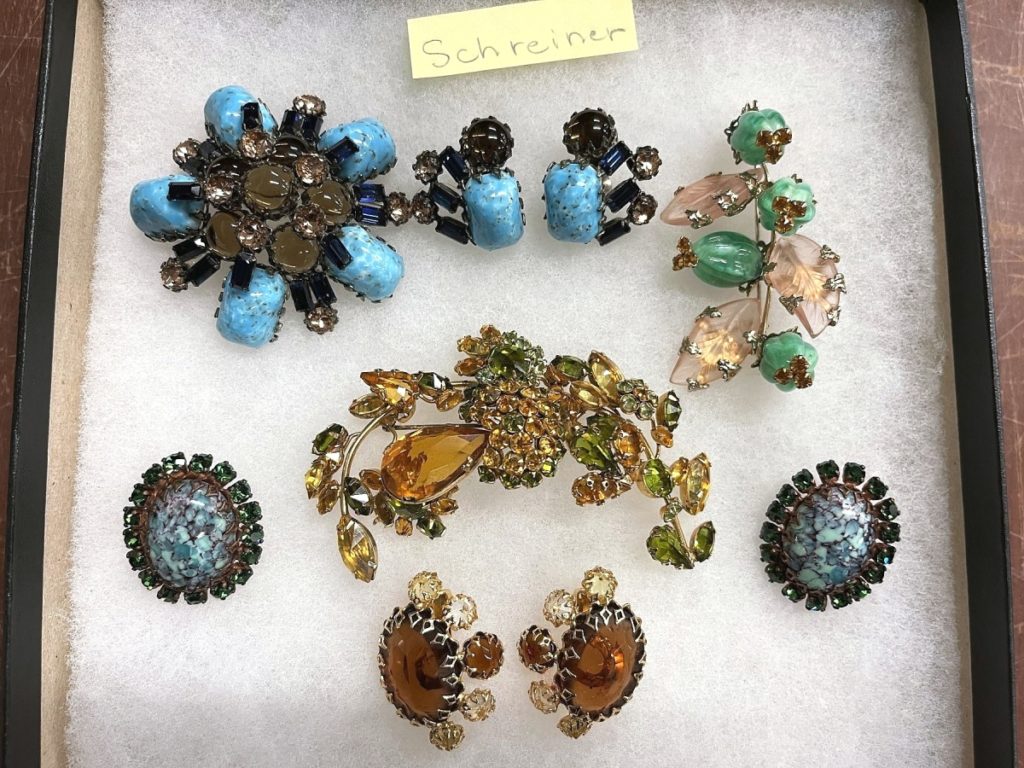 CLARENCE, N.Y. — Schultz Auctioneers conducted a three-day antiques auction June 16-18, offering a wide range of categories such as paintings, dolls, breweriana, spool cabinets, coins, antique and costume jewelry and more. There was even a Chickering piano. Leading all was a lot of Schreiner jewelry (shown), which cashed out at $5,100, while a fabulous early Chippendale six-drawer high boy dresser reached $3,300. Schreiner is one of North America’s foremost designers of high-end costume jewelry, a genre of jewelry popularized by Coco Chanel and today one of the most collectible. For information, 716-407-3125 or www.schultzauctioneers.net. 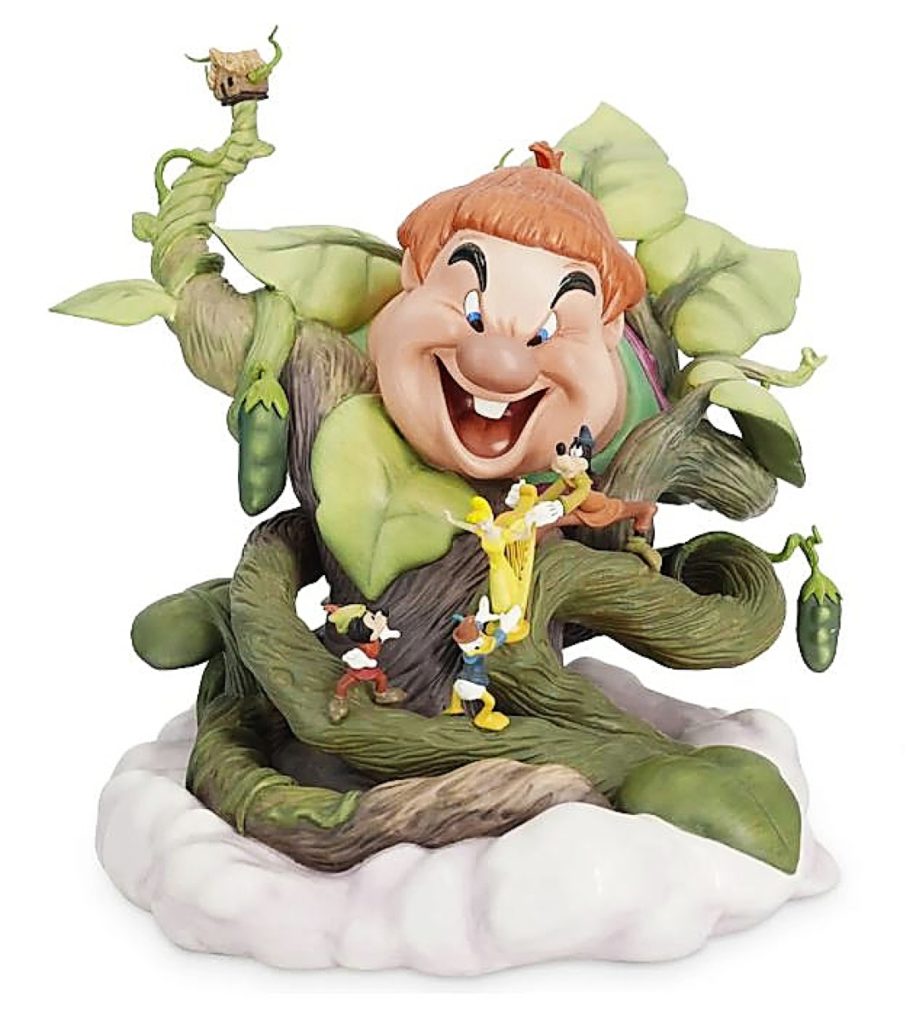 DANIA BEACH, FLA. – Online bidders moused over to Akiba Antiques on June 21 as the firm conducted its “Mickey Mouse and His Friends” sale, where collectors could discover one of the largest Disney collections in the world featuring limited edition figurines from the Disney Classic’s Armani Giuseppe and Swarovski collections. A Disney Fun and Fancy Free Willie the Giant “Big Trouble” figurine with box, estimated just $100/500, took top spot, realizing $1,750. With serial number 11K-46013-0, the porcelain piece was from collection 2000 Disneyana Sculpture, Disneyana conducted at the Contemporary Resort at Walt Disney World in Orlando, Fla., September 5-9, 2000, hand-numbered limited edition 48 of 50, 9¾ inches high. For information, 305-332-9274 or www.akibaantiques.com.

RED HOOK, N.Y. — More than 500 lots of fresh-to-market antique and estate merchandise, hand-picked from the Hudson Valley region, crossed the block at George Cole’s June 25 sale, including many items from a large collection of vintage Doris Day items, costumes, movie posters and more. A gown worn by Doris Day in Jumbo fetched $4,063 (shown), and two gowns worn by her in Love Or Leave Me left the gallery at $5,625. For information, www.georgcoleauctions.com or 845-758-9114. 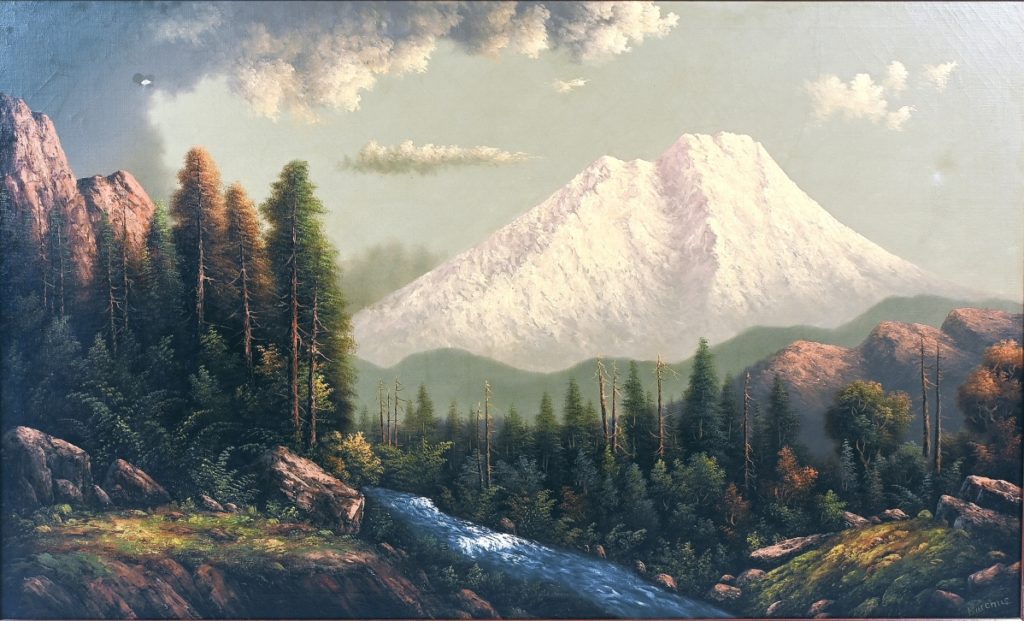 ST PETERSBURG, FLA. — On June 18, estate antiques, fine art and jewelry from south Florida estates made their way across the block at Burchard Galleries. An oil on canvas painting by Eliza Barchus (American, 1857-1959) depicting Mount Shasta was among choice items at the summit of sale, realizing $4,250. Measuring 30 by 50 inches, it was signed lower right, titled verso on the canvas and signed again. Barchus lived in Portland for most of her life. Born in Salt Lake City, Utah, she moved to Portland in 1880. Her landscapes were of well-known scenic spots of Oregon, Alaska and California, such as Mount Hood, Mount Shasta, Yosemite, Muir Glacier and Crater Lake. For information, 727-821-1167 or www.burchardgalleries.com. 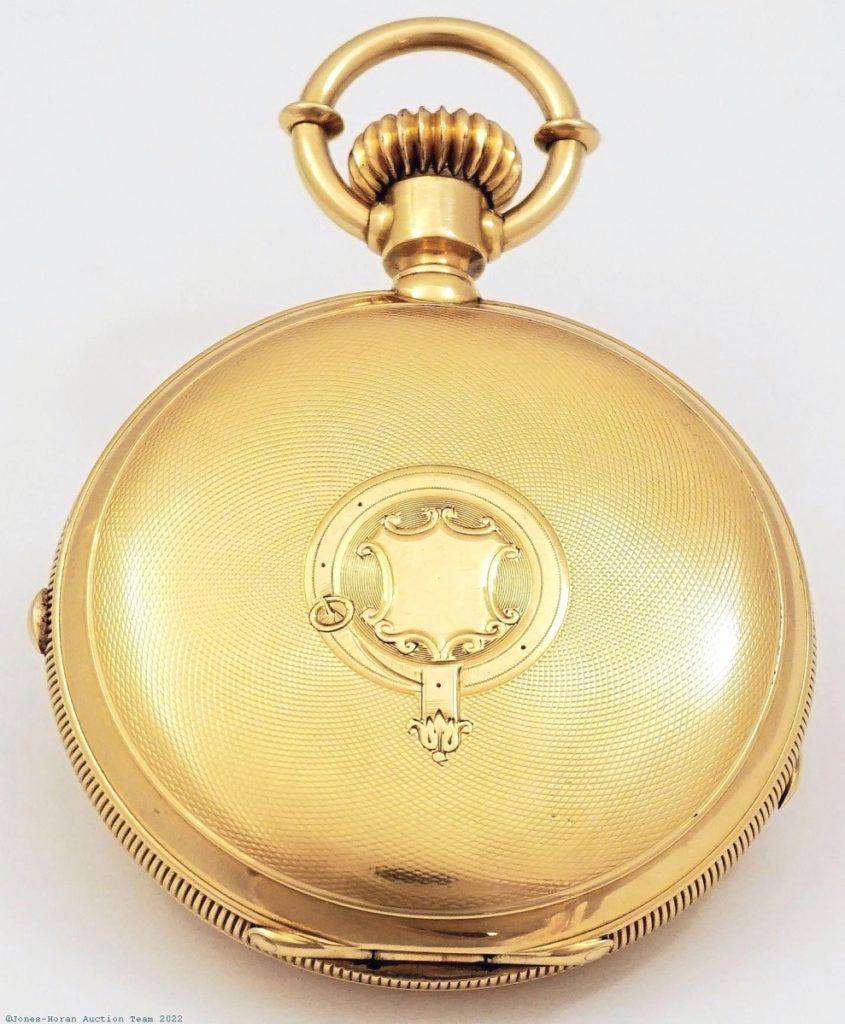 GOFFSTOWN, N.H. — Jones & Horan Horological Auctions sold an 18K gold Swiss two-train chronograph for $3,200 to an online buyer. The case featured a personalized Masonic engraving dated “St Johns Day, 5876” (1876 CE), and the watch is suspected to likely be a product of Huguenin of Locle. For information, 603-623-5314 or www.jones-horan.com. 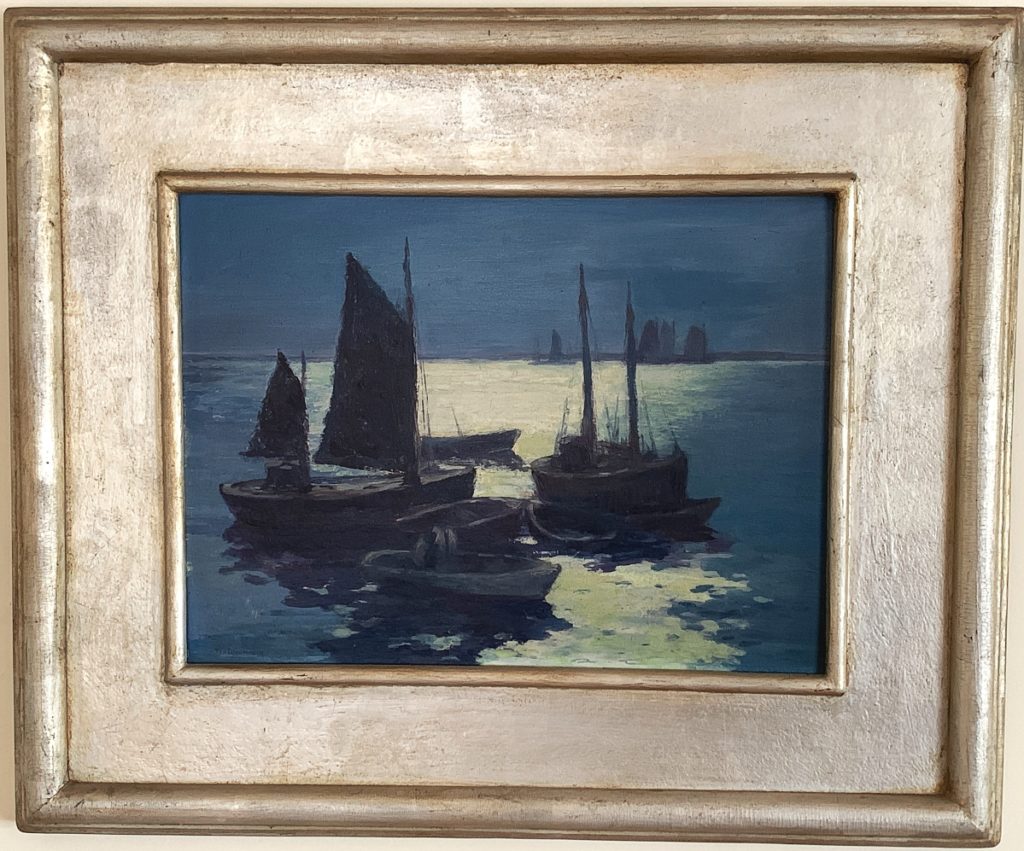 Steenburgh Takes It Out on the Field for Estate Sale

EAST HAVERHIILL, N.H. — “Antiques Auction on the Field” was how Steenburgh Auctioneers of Pike, N.H., billed its June 28 sale, which was conducted and catered outdoors under the big tents. Showcased were items from the estate of Dreamer and John Bagonzi of Woodsville, N.H. A 12-by-17-inch painting on board of boats at night by Provincetown artist Tod Lindenmuth (1885-1976) sold for $3,450. A founder of the Provincetown Art Association and one of the original Provincetown Printers, Lindenmuth was a semi-abstract painter and graphic artist who did much to promote Modernist styles. For information, 603-303-3072 or www.steenburgh.com. 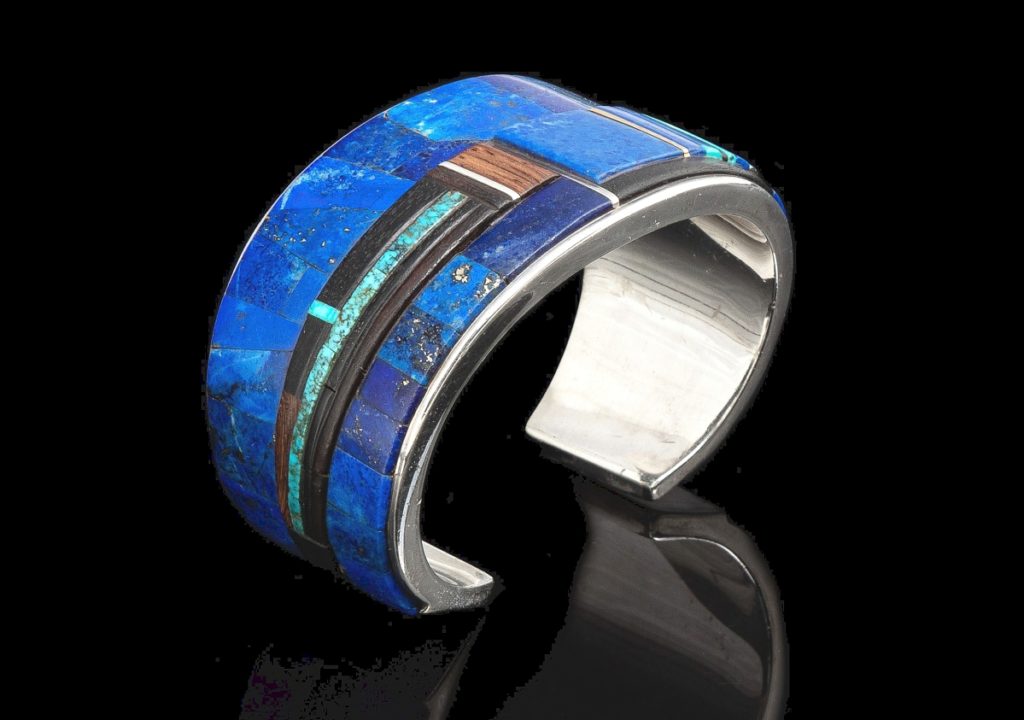 SANTA FE, N.M. — A signature live auction on June 23-26 at Santa Fe Art Auctions featured a selection of fine American art, with June 25 exclusively presenting highlights from the Georgia and Charles Loloma collection. Charles was the redefining Native American jeweler of the Twentieth Century. Session 3 offered more than 100 lots of signed Loloma jewelry. A Charles Loloma ironwood cuff bracelet, 1975, silver, gold, turquoise, ironwood, lapis coral and bone, estimated $20/$30,000, sold for $97,600. Georgia Loloma said that this was the first piece of jewelry by Charles that she ever purchased. According to Georgia, this cuff is a perfect example of what Charles called the “hurt line” — a curvature so perfectly formed that it literally hurts to observe it. For more information, 505-954-5858 or www.santafeartauction.com.

Half Hull Gets Full Price at Eldred’s

EAST DENNIS, MASS. — The top lot in Eldred’s July 7 “Summer Living” sale was a builder’s half hull model of a steam/sail yacht by Ramage & Ferguson of Leith, Scotland, active from 1877 to 1934. The ship identification is mostly worn away, but Ramage & Ferguson specialized in luxury steam/sail yachts and windjammers, notably the Kobenhavn, the largest sailing ship ever built in Britain, made for the Danish government. It sailed to an online buyer for $6,250 who beat out absentee bidders as well as those in the room and on the phone. The model came from an Annapolis, Md., collection and had carried an estimate of $500-$1,000. For information, 508-385-3116 or www.eldreds.com.