Celebrated for its use of color, pattern, and design, Noritake china has undoubtedly become a prized possession for collectors worldwide. The revered antique dinnerware boasts colorful, hand-painted patterns across an array of tableware and servingware including serving trays, dinner plates, vases, and teapots. 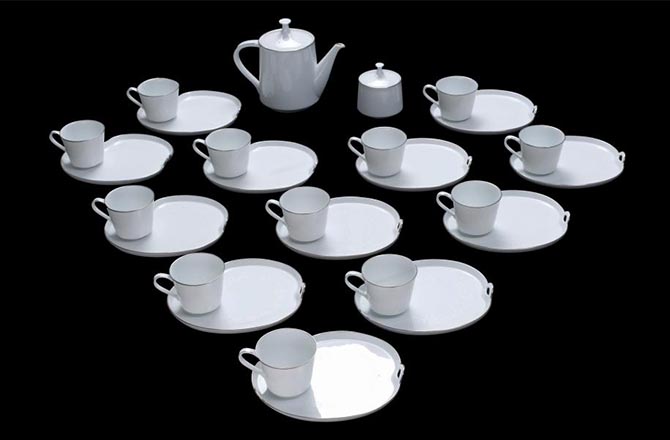 Mass quantities of Noritake have been produced since its founding in the late 19th century, though quality and patterns have varied drastically over time in response to political and economic climates. The Great Depression on the 1930s and World War II directly affected Noritake’s output, which makes each item from those periods uniquely treasured. Though Noritake china remains a difficult collectible to appraise, its value lies in the age and rarity of each individual piece. True Noritake china are some of the most exquisite, elegant ceramic pieces around.

The history of Noritake china dates to 1876, when Japanese businessman Ichizaemon Morimura and his brother Toyo opened Morimura Brothers in New York City. Morimura, an ardent supporter of the modernization of Japan, saw an opportunity to appeal to the United States’ market. At the time, Morimura Brothers sold Asian antiques and decorative arts and exported traditional Japanese wares. After early success, the brothers looked to other outlets they could pitch to American consumers. Though china and porcelain were popular, European factories already dominated the market by the late 19th century.

In 1889, Morimura visited the Exposition Universelle in Paris. There, he encountered the brilliance of French porcelain, which inspired him to create similar wares for the U.S. market. After studying manufacturing, he opened a factory in Japan called Nippon Toki Kaisha Ltd. in 1904. This allowed the brothers to control the quality and designs, ensuring their aesthetic aligned with American buyers’ tastes. In 1914, they created their first Western-style dinner set, named Sedan, to compete with European porcelain.

It didn’t take long for the Morimura Brothers to pique Western interest. Each piece was hand-painted to ensure the highest quality. These early, hand-painted patterns were produced in smaller quantities and therefore are among some of the rarest collected today. In the 20th century, political and economic conditions restricted production and changed the direction of the company on more than one occasion. But the adoption of mass-marketing techniques and demand from global consumers allowed Noritake to continue their success.

Although consumers referred to the dinnerware as “Noritake” as early as the 1920s, the company didn’t officially assume the name Noritake Co., Limited until 1981. The company was restricted from using it as a trade name, stating in their own marketing materials that “Because Noritake is the name of a place, that word could not be officially registered as a trade name. However, because of the consistently high quality and reliability of our products, we were finally given permission to register the name.” Today, they still produce dinnerware that is new, contemporary in design, and consistently in demand.

Noritake continues to produce china today, offering contemporary patterns and designs, though the oldest and rarest Noritake china patterns remain the most valuable examples in the market. Noritake china patterns can be found on a variety of decorative wares, including pitchers, platters, gravy boats, and dinnerware. It is unclear exactly how many patterns have been produced by the maker to-date, but there are a few examples that attract collectors and are instantly identifiable as Noritake. 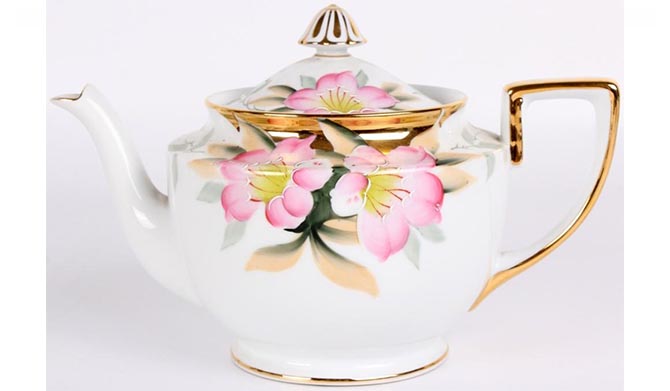 Noritake’s most popular pattern, Azalea, was produced somewhere between 1915 and 1930. Like the name suggests, the pattern featured painted pink flowers on a white background with gold detailing around the edges and handles. The Azalea pattern was used on everything from teapots to table sets to children’s pieces. Noritake’s Azalea was only sold through the Larkin Company catalog out of Buffalo, New York, which gifted the pattern to club members. This proved to be a profitable partnership for the Noritake company as it helped their products reach millions of homes and solidified their reputation in the United States. Azalea-patterned fine china is widely collected to this day. Some of the rarest items include the bulbous vase, pancake jug, china ashtray, and 15-piece child’s set.

Tree in the Meadow 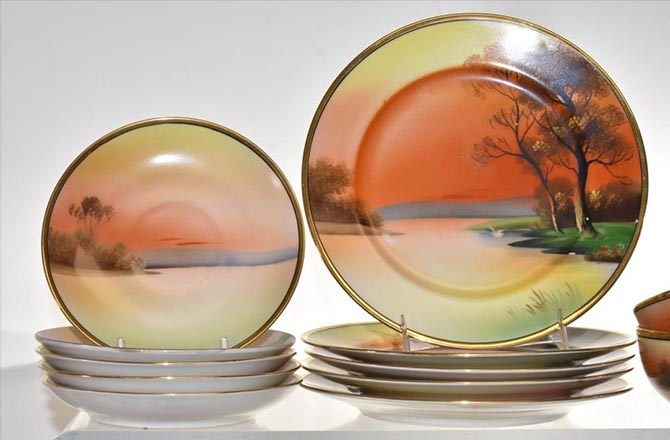 Produced in the early 20th century, another popular Noritake china pattern was Tree in the Meadow (sometimes referred to as House by the Lake). It was originally named “Scenic,” which was fitting for its intricate, hand-painted tree beside a house, meadow, or other picturesque landscape. The pattern adorned plates, bowls, waffle sets, jam jars, butter dishes, among other decorative wares. Many of the antique examples sell for around $20, but rarer items can reach the hundreds.

Aptly referred to as the “Christmas Ball” collection, Noritake’s Pattern 175 was produced for about 90 years, beginning around 1906. This design had a lavish look and feel, but was popular among the middle class for its accessible price-point. The pattern featured raised gold enamelling in a scrolling pattern with flowers in a ball or bulb form against a white background. The gold tracery offered a touch of exuberance.

Considered less of a pattern and more of a glazing technique, Noritake lusterware was one of their most popular and important developments in the 20th century. Lusterware was achieved by adding a metallic oxide over a base color. The thin metallic overglaze created an iridescent, rainbow-like glow that appealed to many, especially at the beginning of the Roaring Twenties and the years following the Great Depression. Noritake lusterware can be found in orange, blue, white, gold, as well as other colors, and was featured on a variety of objects. 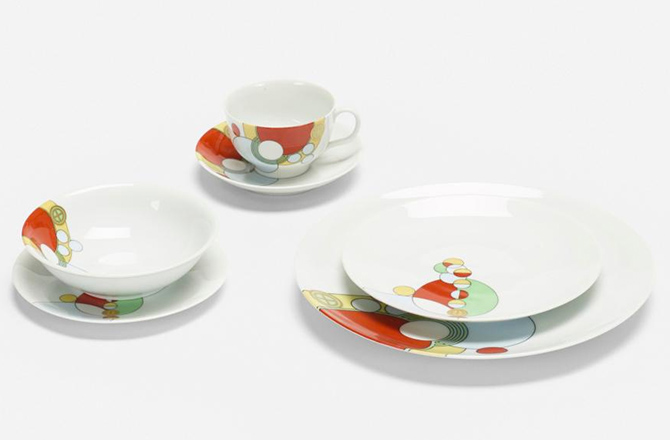 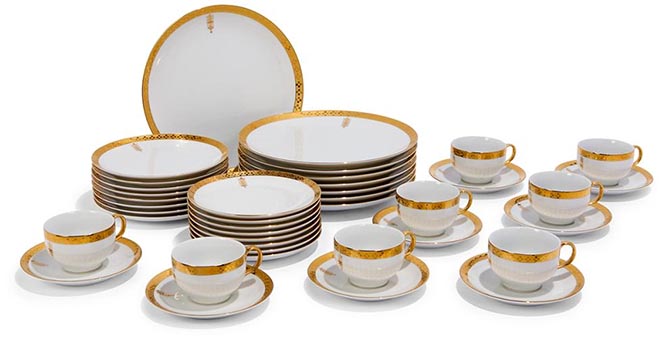 A later set was produced again in collaboration with Frank Lloyd Wright and retailed by Tiffany and Co featuring a simple gilt design.

To pinpoint the age of a piece, start by identifying the backstamp, or maker’s mark, usually found on the bottom of the object. Certain backstamps were used during different periods in Noritake china’s history, so this hallmark is an important factor in the appraisal process. Though there were a variety of backstamps used, some of which overlapped over the years, they provide a general sense of the period from which your antiques originated. For example, until 1921, porcelain was marked with its country of origin to comply with the U.S. McKinley Tariff Act of 1890. This law changed in 1921, requiring the place of origin be marked in English, so stamps were changed from “Nippon,” a more formal translation of the country’s name, to “Japan” or “Made in Japan.

There are over 400 known Noritake backstamps with a variety of patterns, so it’s difficult to identify the exact date of origin for many collectible Noritake sets. However, the three most common marks used for extended periods are Noritake Maruki Marks (often called Komaru), M in the Wreath Marks, and RC (Royal Crockery) Marks. To help establish the age and potential value of your Noritake china, consult the backstamp guide below. 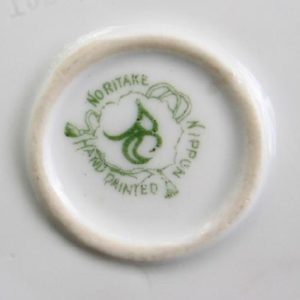 The first Noritake stamp registered in 1908 had a series of circular marks with RC drawn on top and Noritake on the bottom in an Art Nouveau style. The monogrammed version shown here appeared in Japan a couple years later. 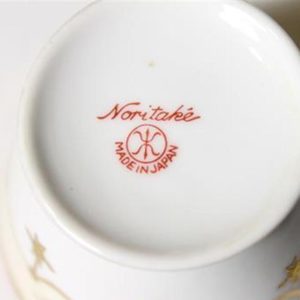 Includes a tree, later changed to spears to symbolize breaking through obstacles, and a circle for peaceful settlement of problems. 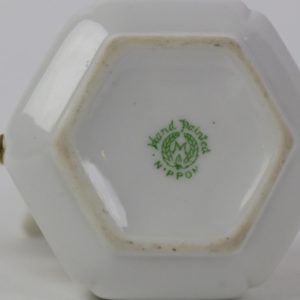 Stamp: M in the Wreath

Large, gold “M” encircled by a wreath. This “M” stood for their namesake, Morimura, and was used until World War II. 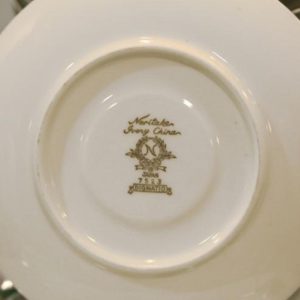 Gold with the lamp logo and crossed laurel branches. This often featured an “N” for Noritake in the center with the word “Noritake” above and “Japan” underneath. 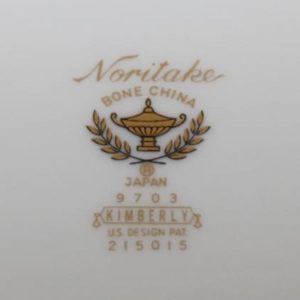 Features the words “Noritake Bone China” written above a Grecian style urn within a wreath with “Japan” written underneath.

The oldest Noritake china is the most valuable and rare. During the beginning of the 19th century, not many examples were produced, so their hand-painted features are in-demand. Some of the rarest items include bulbous vases, pancake jugs, china ashtrays, and even children’s sets.

Today, Noritake remains one of the largest manufacturers of china and porcelain, with production facilities all over the world. They have expanded to produce stainless flatware and crystal. This type of mass-distribution has made it difficult to distinguish between a true antique and more common wares, which makes comparing the backstamp crucial for determining the general value of your object.

While condition is important when determining the value of your Noritake china, rarity can sometimes eclipse this. Rare pieces have intrinsic value despite ware and tear, though the same piece in better condition can appraise for more. Those in the best condition have:

Noritake continues to be a valuable collectible for china and porcelain enthusiasts. The fascinating history of the company and their practices only furthers the complexities and mysticism that surrounds these sought-after Japanese antiques. If you’re unable to ascertain the time in which your Noritake was produced, consult an appraiser and compare it with comparable items from price databases.

Wondering what your Noritake china is worth? Click here to have it appraised by experts.